Rosalia is an almost 4 year old Labrador Retriever-mix, girl ( Born 4/17/2017 ) She arrived at Scooby on April/17/2018; from Valdeperdices
This poor innocent Angel, arrived in a bad condition. She was lucky to be rescued by Scooby from a terrible case of dog abuse… rescued from “The shed of Horrors” in Valdeperdices ( saved from the death…)
Despite having suffered continued abuse, neglegt and mistreat; never received a caress or a gesture of affection, Rosalia is a sweet, lovely girl; just a bit shy/insecure sweetheart
no wonder after everything she had to go through in a life of knowing only abuse…
This sweet Angel is very much deserving and in urgent need of a loving Home, which she never had in her whole life…please

‼️First PRISION SENTENCE in Zamora by ANIMAL ABUSE to 40 dogs‼️

The Criminal Court of Zamora has condemned J.G.M. for a continuing crime of animal abuse and another of animal abuse with result of death at a penalty of 13 months and 15 days in prison and the confiscation of the intervined animals in favor of SCOOBY.
The images that accompany the text correspond to the day of their liberation, in June 2018. As you can see, their life (if it can be called life) was a real hell and if they had not been intervened by the Guardia Civil, the end for all of them it would have been death 😓, since they lacked water and food, were full of parasites and many of them was sick.
Now we have to focus on finding a home to the 36 dogs (many of them of rehala*) who were lucky enough to get out of that shed of horrors alive and that despite having suffered continued abuse and never having received a caress or a gesture of affection, they all are wonderful animals. In a few days we will introduce them  ♥️.
We take this post to publicly thank the lawyer and the prosecutor of this case, Iván Prada Moral and Javier Robleda Fernández, respectively, since they have made their work for free in order to avoid any type of expense by having presented us as an accusation particular.
This news has had a great impact on the media, so we put several links so you can read it completely and get more information about this serious case of animal abuse.

*(REHALA: Set or group of big game dogs, led by the same hunter, and whose number varies in each regional regulation; the most common is between twelve and twenty-five)

Some photos of the Scooby rescue of the 36 dogs of the “Shed of Horrors” in Valdeperdices …( Rosalia is one of them…)
Now we have to focus on finding  homes to all the 36 dogs (many of them of rehala*) who were lucky enough to get out of that shed of horrors alive… and that despite having suffered continued abuse and never having received a caress or a gesture of affection, they all are wonderful dogs. 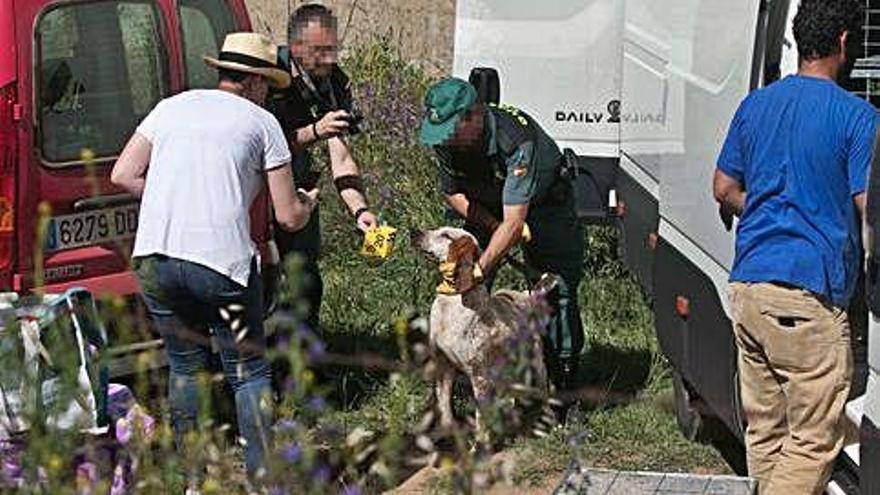 Rosalia is laying in the front

Update 27/11/20219 : Scooby’s major rescue in 2018 of the 36 dogs saved from deplorable conditions managed by one man in Zamora who was renting the dogs out for boar hunting. They were severely neglected and the conditions were amongst the worse the Scooby team has ever seen. Scooby mounted a private prosecution and late in 2019 won its court case against the perpetrator. The court handed down: a 13 month suspended sentence, a 4 year ban from keeping animals and awarded €3,000 costs to Scooby. This is quite something – a landmark decision for animals in this part of Spain.  (   https://www.laopiniondezamora.es/comarcas/2019/11/27/condenado-13-meses-carcel-maltratar-1021275.html )